What are the main factors that will affect the Research & Innovation Environment in China until 2025? A recently released report titled ”China 2025: Research and Innovation Landscape” identifies 16 factors that could drive various evolution scenarios.

It is an undeniable fact that China has become one of the most influential powers in global political and economic orders, which has made the capacity of this country to sustain a long term development a fascinating topic.

In a recently released report titled China 2025: Research and Innovation Landscape, 16 driving factors were revealed in exploring the single focal question: What are the main factors that will affect the Research (R) & Innovation (I) Environment in China until 2025?  A combination of desk-study analysis, a Delphi study and a Crowd-sourcing platform, have been utilized to conduct the report.

After applying both Trends Impact Analysis and Cross Impact Analysis to those factors, while taking into account signals and wild cards which are very improbably but could cause a sudden and rapid radical change when take places, researchers depicted four scenarios for China future innovation, are all set at 2025:

Obviously one can read the strong role of governance and of the national economy on the future developments.

The study was performed by Phemonoe Lab (Emetris) and PRAXI/FORTH in the context of the “Dragon-Star” project which was funded by the European Commission, aiming to contributing to the bilateral dialogue between the EU, the Member States and China.

What has scenario to do with the future?

SJTU ParisTech Review – The methodology of this report, scenarios methodology, has always been used in  futurists’ books. Is it a common method in dealing with  future-related issues? What are its advantages and limitations?

Stavros Mantzanakis –  Based on Phemonoe Lab’s tools and methodologies from our networks and partners around the world we could say that Scenarios are one of the easiest ways to present complex information to decision makers and the public that makes future possibilities seem more real. They help us in developing plans that are viable over the wide range of possible futures—with both plans and a process that manage uncertainty.Here is where there is a connection and alignment with strategic planning. This is one of the main advantages.

Another advantage is the process of developing scenarios can help decision-makers develop anticipatory awareness. Since change is rapid and complex, this process increases the ability of the mind set to anticipate better and thus help it to manage the resulting uncertainty better as well.

A weakness of scenarios is when given to non-participants, the scenarios can be mistook as the “official set of possible futures” and hence, control or limit their thinking to some degree. Scenarios have great ability to influence the reader in subtle ways due to the writer’s assumptions about cause and effect. The writer’s mental model of how the world works is transferred to the reader, and possibly unconsciously accepted. A way to avoid this problem is to involve stakeholders in the scenario construction process.

Scenarios can fail to be useful when their authors either fear criticism for saying too many things that seem too “far out” or fear that they will lose credibility with decision makers. Sometimes editors take out the controversial items. This defeats a key reason for doing futures research: to stimulate new thinking in an environment where “truth” is not discernible; hence, possibilities are acceptable for discussion. If only the conventional can be discussed, there is no reason to try to show alternatives. Even when the unconventional is discussed, it is often forgotten later, when the events occur.

It should also be remembered that sometimes scenarios are written so that they will turn out to be wrong––scenarios about global warming in the previous decade(s) were written to explore how they could happen, allowing analysis of how to intervene to prevent it from happening.

Why did you choose 10 years as the time framework to build the analysis and projections?

There is a time frame where people can prognose things, and develop action plans using quantitative data. Then there is a time span where you can use scenarios based on trends and drivers, difficult to estimate but you can draw lines regarding some futures and use  more qualitative data. And then there is the hoping and guessing period when uncertainty is extremely high. This is a general context of the methodology. Regarding our study we wanted to feed the European authorities with data and analysis for the next planning period that starts from 2020 and on, so we had to pick a date after 2020, but not too far away so we could draw some analysis on possible futures. 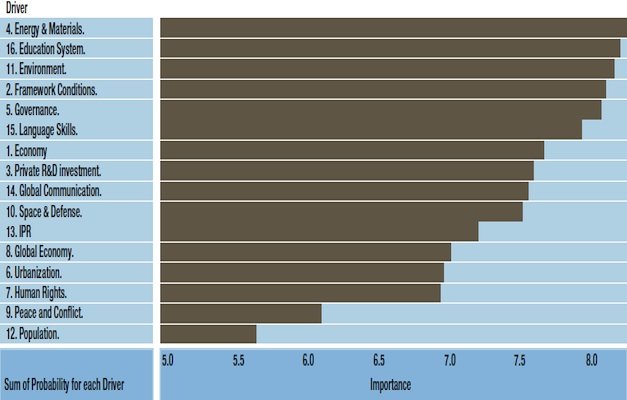 To what extent has the crowd-sourcing platform contributed to collecting data and forming the conclusions?

Τhe Co:tunity is a multi-functional smartphone and web application for collaborative trends potting and innovation developed by Kairos Future and provided for use to Dragon-Star team. It was utilized to easily gather, share, develop and analyze trends and ideas and also to validate the results from our research. Many people have used it to provide a number of fresh ideas regarding our trends validation.

Implication of the scenarios

Regarding China’s innovation capacity, people opine very differently globally. Some believe that China is innovative and doomed to be the powerhouse of innovation; while others worry China will never catch up with Japan and the US in terms of innovation. How did this happen?

You are right about that comment. China’s main strength during the last decades was and still is its manufacturing capabilities, along with large scale, fast execution, deep industrial knowledge, a large domestic market and the known entrepreneurial spirit of the Chinese people. In order now to build a new business model and with it to become the world leader, China must improve its academic capacity where basic research lags behind. The whole ecosystem and institutions must be more innovative supportive.

In the analysis, we saw that some important factors which largely decide the R&I environment in China are the same time very uncertain to happen, for example the education transformation and IPR improvement. What are the challenges to the Chinese government and leaders in this regard?

In the past decades, China has managed to transform a system of elite education to a system of mass education. Now in order to maintain its growth and become the innovative leader it must do anything possible to increase enrollment, attainment and graduation rates, in all levels and especially in higher education. Many reforms has been done and more are needed to reduce inequality, increase trust, encourage creativity and keep the public spending on a high level.

Also regarding IPR, the government’s challenges are poor implementation of IPR laws, insufficient efforts and resources on dealing with IPR. A strong and trusted IPR system and environment is and will be favorable to domestic SMEs seeking a role global innovative player. 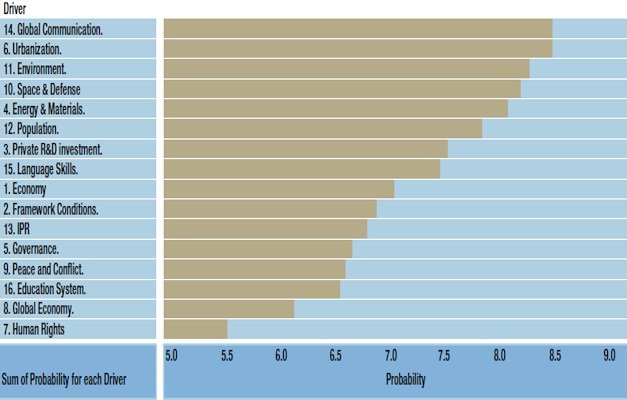 What attitude and actions should be taken to weak signals or wild cards like a nuclear accident? Rapid growth masks lots of problems in China, which will make future much more unpredictable.

Since I’m not familiar with this subject, I’d rather not answer.

Among all the strong trends, why didn’t we see the “technology infrastructure”, which has played an key role in deciding the images of governance, education and investment?

I think it is because”technology infrastructure” is considered as an asset and in that perspective a result of a number of policies and plans.

Will global connectivity facilitated by co-resourcing, networking and cloud computing undermine the cultural diversity which is also critical to human imagination and creativity?

You are absolutely right about that. From the other point of view, since the world is still opening, innovation and competition are global as well, with a strong cultural base, China has huge competencies to become leader in innovation. I believe that for China it would be easier to accomplish.

With automation’s becoming mainstream in sight,  what does it mean for China’s urbanization and population issue, though population was not rated as the most important drivers of China’s R&I future in the report?

I would imagine that the reason urbanization and population were not rated higher by the people who answered our questionnaires was because most of them believe that in more than 10 years those drivers might not be as important as are today. Also it was clear in the report that urbanization will be a huge driver for China’s future business model favoring indigenous innovative companies that most of the times flourish in urban ecosystems.

What are those technology sectors as well as geographical areas that are likely to bloom in the years to come?

In different scenarios there are different sectors that might flourish. At the end of each scenario you can find it, i.e. in the scenario of Dungeons and Dragons: the main topics of research interest are military technologies; Gen IV nuclear power plants; alternative raw materials; hydrocarbon fuel from bacteria, IT; transport and space; security; sensors; health technologies; water/sewage cleaning; GMOs.

In terms of geography our study did not come up with any results. There is a new study undergoing that might touch that aspect.