The Net neutrality has nothing to do with universal values. Its aim is to balance interests between Internet service providers and Internet content providers. This was the biggest stake in the U.S. Federal Communications Commission decision, in February. What did it say exactly? Can such a decision really provide the ICPs and public with a free and equal Internet accessibility without any costs?

On February 27, 2015, the U.S. Federal Communications Commission (FCC) voted to pass a strict regulation on Internet service providers. The action was deemed the most radical attempt by the U.S. government in achieving network neutrality.

The FCC passed similar legislation, which was called the “Net Neutrality Principle” with a vote of 3 to 2 in 2010. Composed of one part of ideology and the other part commerce, this document can be summarized into the following three points:

1.Transparency. Fixed and mobile broadband providers must disclose their network management practices, performance characteristics, and terms and conditions of their broadband services.

The “new rule” passed last month has expanded the coverage of the third item to include wireless Internet service providers (ISP).

The nature of the neutrality principle is neutral: balancing interests. It has nothing to do with universal values, but balancing interests between ISP and ICP, through the intervention of government. This explained why quite a number of American citizens believe this is a bad policy – not a surprise in a country where most people prefer the government not to intervene in business matters.

Stance of major companies
ISPs don’t favor net neutrality, as it states the rule of price non-discrimination, the result of which is reduced income. One of their arguments is that Net neutrality is a negative incentive, that will slow donw investments in ultra-high speed networks. Meanwhile, content providers are at odds with each other. This is particularly true with some big companies who have shaky grounding.

Google is a great example. There were plenty of remarks by Google supporting net neutrality from the very early period, until it rolled out its plan to become an ISP and started to scale down its support of net neutrality. In 2010, Google and Verizon compromised on the net neutrality of wireless networks. In their announcement they said, “We both recognize that wireless broadband is different from the traditional wire-line world, in part because the mobile marketplace is more competitive and changing rapidly,” the joint statement said. “In recognition of the still-nascent nature of the wireless-broadband marketplace, under this proposal we would not now apply most of the wire-line principles to wireless, except for the transparency requirement.”

The major reason for such a shift in attitude is that Google cannot stay an Internet content provider (ICP) forever. A series of actions by the company during recent years did not help at all in offsetting rumors about its transition to an ISP. In 2005, Google won a huge block of IPv6 addresses, which was almost equivalent to that of ISP, SBC and Earthlink. It purchased a great amount of fiber optic equipment in 2006 and became a company capable of building a backbone network. In a Netflix report in 2012, Google had become the fastest ISP in the U.S. after it provided fiber optic service to Kansas City at the speed of 2.55 Mbps, faster than 2.19 Mbps offered by Fios, a similar type of service under the management of Verizon.

Google gradually shifted its standing on net neutrality as it was establishing itself as an ISP. In support of Slingbox, Google signed a document with the company in 2012 in praise of the possibility and practicability brought by the net neutrality strategy adopted by Slingbox. But after a year, SlingBox issued a legal warning against using optic fiber services offered by Google, which, unexpectedly, pushed people away from SlingBox. The decision could be traced back to Apple. Before then, Google used to be a big supporter of SlingBox, a set top box producer, which it claimed “was able to override pressure from Apple and AT&T.”

Google invested heavily in building a wireless network by setting up wifi hotspots and acquiring smaller wireless ISPs. This may be one of the reasons that Google and Verizon compromised on wireless networks after all. Google has every reason to develop as an ISP. By providing such services, Google is able to know its users better. Furthermore, Google will risk panicking service providers (AT&T, Verizon, T-mobile, etc.) that may eventually block its services. After becoming an ISP, Google can increase the network rate of mobile devices and ensure the availability of Google products (e.g. Google Wallet) with partial control on the wireless frequency chart.

ICPs with leverage like Google’s are capable of expanding to service providing. Those among the rank and file wanted more net neutrality for cost-saving purposes. Twitter has always been on the supportive side. Smaller companies hope their larger competitors can’t snatch up broadband resources just because they are richer (assuming there is price discrimination).

Nevertheless, the FCC encountered two instances of failure: in 2010 and last week before voting. The recent failure was caused by the Federal Court striking down the FCC for exceeding its authority. What is exceeding authority and how did the FCC manage this accusation?

Internet: a public service?
As mentioned above, the balancing manifested an obvious government intention of intervention. This is not a popular move in a country like the U.S. where most people cherish the value of the free market.

The Internet was deemed a type of information service in the past, which belonged to the market category. The government should yield to the invisible hand of the market – an instinctive choice made by the Americans who believe in free capitalism. Running this line of thinking, the FCC learned to act intelligently this time by defining communication as “telecom service.” The redefinition justified the net neutrality rule, since telecommunication was categorized as a “utility.” The FCC, as a governmental apparatus, became naturally endowed to intervene and make rules without being accused of going overboard.

The FCC also targeted mobile service providers by categorizing mobile broadband services as “telecom services.” ISPs are banned from blocking and speed-limiting activities. They are also forbidden from reaching discriminatory deals with ICPs, meaning there will be no fast-track services provided to those who pay an additional fee. In other words, ISPs can neither cut nor raise the network speed whether ICPs have made extra payment or not.

Taking network as a means of communication means the Internet has won public acknowledgement – the most commonly used communication tool. There was an ironic illustration of a revised Maslow’s Hierarchy of Needs that went viral online. There is one more layer at the bottom of the pyramid that said: Wifi password. The exaggeration told us a fact: the Internet has become one of our basic needs in life. 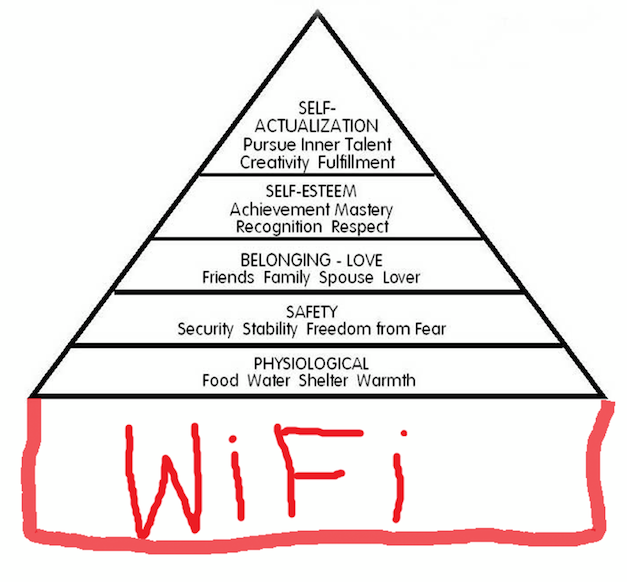 It is one thing that the FCC has won the power to manage on the basis of this fact, yet it’s another to build a network neutral regime with this power. It remains controversial that even the FCC has passed the regulation with a vote of 3-2 in internal voting. Is it putting the technological innovation of ISPs in harm’s way? ISPs have weak momentum to renovate their networks when there’s no difference in the price. The only thing they are interested in doing is selling more expensive connecting services to rich ICPs.

Some major ISPs have expressed their support to the non-blocking and nondiscriminatory principles in the new policy. But supervision imposed by the FCC will lower return on investment and impede investment, which will put a crimp on experiments with services and operations.

The calamity of restricted innovation is damaging, as we cannot expect network speed to get faster when ISP provides services not only to ICPs, but also to individual users. It might also be possible that the quality of broadband will become worse.

But this concern might have neglected another factor: competition. If even big ISPs become short of momentum, smaller companies will ponder taking the chance to topple them. The best way is through technological innovation. Smaller telecom companies such as Sprint and T-Mobile US believe the new deal only has limited impact on investment.

Another concern was derived from a possible pinch on some innovative network services with high bandwidth requirements. The CEO of Nokia argued that the new rule will stymie the development of self-driving technology as a means of public transportation, as well as some other medical and health services. The presumption of this viewpoint: some types of services should be understood in a different way.

For healthcare services in particular, it is a life-or-death matter, to which price neutrality will never be legitimate. People who are more affluent are willing to spend more on treatment – the world runs on the basis of this rule. For instance, a high-speed and steady network connection is required if several doctors are video-conferencing at different locations on the condition of the same patient. Will the network neutrality rule stand in the way of the patient’s effort in seeking medical services?

Just as claimed by those Republicans who are dangling an axe over it, the new rule with plenty of uncertainties will face more legal challenges. However, the FCC also reminded that it has expanded the coverage of its regulation on Internet trade, which points to connection services paid by ICPs to ISPs. The FCC will go through every single complaint case, and this could offer another chance to them.

The principle of net neutrality does have some unpredictable fallout. But there is one thing that is out of the question: just like water and electricity, the Internet has become one of our life necessities.

Note from the author. Internet service providers, or ISP, means providers offering Internet connection services; Internet content providers, or ICP, refers to websites/Internet companies. In some European countries, the latter will also be referred to as the former meaning.