In a nutshell, microfluidics is the science of how we analyse and handle fluids at a micrometric level. There are about ten thousand research scientists round in world involved in the field today, 200 start-ups and about 600 industrial end-users. MIT’s Technology Review regularly cites this technology as being one that could “change the world.” Analysts at BBC Consulting say it will revolutionise chemistry and biology. Various and numerous industrial applications, from medecine to IT, could transform a 6 billion dollar market into something much, much bigger.

From spiders to chips
My first and foremost remark is that Mother Nature, for the past several hundreds of millions of years, had developed a perfect mastery of microfluidics. Trees, for instance, are truly impressive microfluidics systems in the way they transport sap fluids to a network comprising thousands of leaves, in a totally homogeneous way via a network of millions of small capillaries with diameters ranging from several hundred microns to thirty nanometres for the finest. We should note that this challenging process takes place at micron or even submicron levels. Add to this that the trees work under negative pressure (aspiration) and that, from a strictly hydraulic point of view; represents a truly remarkable performance. Bubbles nucleate constantly in the sap-capillaries but trees incorporate thousands of integrated valve devices that prevent general gas bubble embolism from occurring in trunk or branches.

In like manner, spiders are micro-fluid experts. To spin a web, a spider has microfluidics protein rich excretions that solidify and produces a constant flow of fine, hair-sized, fibres, with optimal adhesive properties whereby the prey, flies, are captured. Human beings too manage micron flow phenomena in a highly controlled manner. Our extended scale runs from several nanometres (proteins such as aquasporin for our cell water channels) to one hundred microns (the larger blood capillaries). In a word, without microfluidics, life would not be possible. Today, we are a very long way from being able to reproduce such systems.

The human species is several hundred million years behind Nature, but is progressing rapidly. For a long period, microfluidics was compared with microelectronics. As a useful analogy, this led to seeing fluid flows as similar in essence to electron flow – and this is fairly reasonable – and also micro-fluid labs on chips to microelectronic chip devices. ‘Functions’ can be installed on labs-on-chips, which are assembled into ‘bricks’, each step contributing to a continuously increasing complexity. 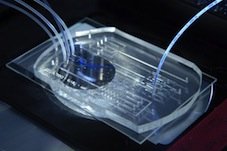 Examples of labs-on-chips are now quite numerous, and if we were to make an inventory list probably would probably require several hundred thousand inscriptions. As an example, I could cite the microfluidics chip that ‘ingests’ a sample, mixing it with a specific solute, draining the resultant mixture in an electrophoresis channel and finally provides information as to the DNA structure of the ingested sample. This exemplifies multiple purpose chip architecture, one possibility being rapid detection and positive identification of a suspect’s DNA before the arrest period comes to an end and the suspect must either be indicted or released.

Other examples of chips are embodied in systems that synthesise certain molecules that are impossible to obtain using classic technologies, or that crystallise proteins far faster that in standard processes, etc. Miniaturisation, in each case – beyond simply reducing the size of the sample – helps accelerate the process without any loss in analytical performance. The underlying physics – that makes such feats possible – lies in fluid flow ‘laminarisation’, prevalent capillarity, extreme rapidity in both thermal and mass exchanges, and enhanced electro-kinetic effects.

Innovative spheres
In various research laboratories, micro-fluidic technologies are becoming increasingly common. The first experiment that demonstrated their usefulness in basic research was carried out by prof. Steven Chu, in 1994; he was co-laureate of the 1997 Nobel Prize in Physics. Steven Chu placed a particle with some DNA strings at an intersection of several micro-fluid channels. Hydrodynamic stretching was observed in the now elongated molecule and, for the first time, the physical conformation of the molecule could be displayed visually using fluorescent markers along the string. This experiment led to the founding of a now well-established domain for research: single molecule studies. Today microfluidics is used to good purpose in many physics, chemistry and biology laboratories. Scientific reviews are full of contributions to progress in science thanks to the technology.

Microfluidics innovations are also numerous and varied. The analogy we mentioned with microelectronics has encouraged research scientist and engineers to produce massively integrable control valves for the purpose of enabling assembly of micro-fluidic microprocessors. The company Fluidigm proposes elaborate systems made of PDMS , including one thousand micro control vales integrated on a single chip. Such systems allow you to analyse a complete genome and its transcriptome on the basis of a single cell; the detection capacity covers around 50 genes, on hundreds of cells. The price tag for this instrument is still high (about 200 k€) and this is perhaps one of the reasons why these systems are not thus far distributed in quantity to biological research and analytical teams. Nonetheless, the demonstration is there: the sheer power of using microfluidics to study living material. There are, I add, some interesting technical barriers to overcome in the field.

Microfluidics is not just twice removed relation of microelectronics. Moore’s law does not apply here, nor is there any kingpin material involved; nonetheless, there are constraints and issues that require engineers to demonstrate versatility, in terms of choice of material, in terms of surface chemistry, of geometry and/or function(s). But, inasmuch as microfluidics is basically very versatile, to the point that is can be used to solve very varied problems, ranging from cosmetics (where new skin creams have been created) to the oil extraction business (where crude oil measurements can be carried out in situ), or again the pharmaceutical sector (where micro-fluidic screen can accelerate the discovery of new molecules), low cost diagnosis processes (obtained by using micro-fluidic paper), etc.

Markets and institutions
According to the BBC consultants, the microfluidics market is estimated at 6 billion dollars per year, with an annual growth rate of around 15%. A few examples of flagship microfluidics systems are ink-jet printer heads, rapid DAN analysis; (Agilent) – over one million chips have been sold; Abbott chips for diagnosis – about 10 million units sold; display systems.

In certain domains with high potential, such as DNA sequencing or display systems, microfluidics is able to provide revolutionary innovations, i.e., able to radically change the techniques we use today and to induce major, comparable changes in other, associated domains. DNA sequencing is one example and is carried out currently in large-scale centres, at a rate of some 1 GBase/day. In practical terms, it takes about 10 days for a cost close to 20 000 dollars.

We are far from having a personalised medical monitoring based on genomics. Microfluidics does, however, have the potential to reduce costs and time by several orders of magnitude, thanks to progress accomplished in nanopore technologies, or micro-droplets. The future will reveal if these two approaches prove successful, but the message clearly is that in the laboratories involved in microfluidics today, frequently the scientists and managers are faced with all sorts of challenges.

Generally speaking, we can assert that the sector is still very dependent on public research financing by government funding. Government research retains a central position here. It was in this context that the decision was made to establish the Pierre Gilles de Gennes Institute for Microfluidics (IPGG), with its 14 research teams located in 4 institutions (ENS, Chimie Paris-Tech, ESPCI ParisTech and the Institut Curie). All told, there are 170 research scientists, including PhD students and post-doc qualified trainees. The IPGG is supported notably by the ESPCI and the City of Paris who freed premises covering 6 000m² to house 4 of the Institute’s laboratories. A start-up nursery, managed by ESPCI will also be located here, given that one of the prime aims is to see microfluidics technologies disseminate.

The future of microfluidics probably lies in exploring a diversity of situations and achieving low costs to do so. Rather than talk about a (single) new revolution, perhaps we should refer to several (plural) revolutions on the near horizon. The reason for this view is that microfluidics now addresses a large number of research and market slots, some of which, in terms of turn-over, will represent literally billions of dollars per year. One of the keys to future development will be the growing pressure in the area of health-related expenditure. Millions of these chips will be bought by hospitals and the underlying technology helps frame certain strategies to invest in the market slots as and when they emerge.

One of the challenges for research scientists is how to anticipate the moment when these technologies will expand and start developing, as of now, the simplest, least expensive solutions. The technological platform of IPGG was designed with this vision in mind; the objective is not to appear as the supplier of the best technologies, but rather to propose efficient, less sophisticated, less expensive instruments, that will prove user-friendly, viz., accessible to operators. “Faster and cheaper” could become the leitmotiv of the platform. Microfluidics tomorrow may well comply with this.