Following the diplomatic success of the Paris agreement, we will need an economic success in the years to come. After the time of diplomacy, future advances now depend on firms and researchers. And it will not happen if the economic or legal signs are in conflict with the ambition of the agreement of December 12th.

The Paris Climate Conference has been hailed as a diplomatic success, but will it be able to thrust climate change as a forefront priority of the economic world? Optimists will note that several entrepreneurs have announced significant investments in this area: Mark Zuckerberg or Bill Gates in the US but also Jack Ma, leader of the Asian giant Alibaba. Pessimists argue that these commitments were takenlong before the climate agreement. Besides, it isn’t necessarily a good sign that the funding of philanthropists should outweigh that of governments!

For the sake of clarity, it should be noted that the objective of reducing global emissions of greenhouse gases amounts means valuating them with a “shadow price”: in other words, emitting greenhouse gas should be expensive enough to make its capture or mitigation profitable, in order for net emissions to cancel each other out by the end of this century. Currently, the cost is in many cases null: it can even be negative in situations where fossil fuels are subsidized.

The Paris agreement doesn’t determine the price of greenhouse gases – one of its main flaws according to NGOs. But this criticism ignores the fact that such an agreement would probably have been impossible: taking it as a position of principle would have prevented any agreement. Voting for the restoration of a building between 5 joint owners can prove very complicated. Think now of the challenge of reaching an agreement between 195 delegates representing countries as diverse as Mali, Sweden, Qatar or Vanuatu, on a subject as complex as climate change! Since Rio 1992, there have been 21 conferences but no agreement.

By contrast, the Paris agreement sets a number of principles on which the signatory countries agree. First of all, to take the subject of the climate seriously, in all its dimensions (scientific research on global warming, fight against global warming and adaptation to the effects of global warming). Second, to set goals for reducing greenhouse gas: the famous INDCs. The vast majority of emitting countries have fully committed to these goals. 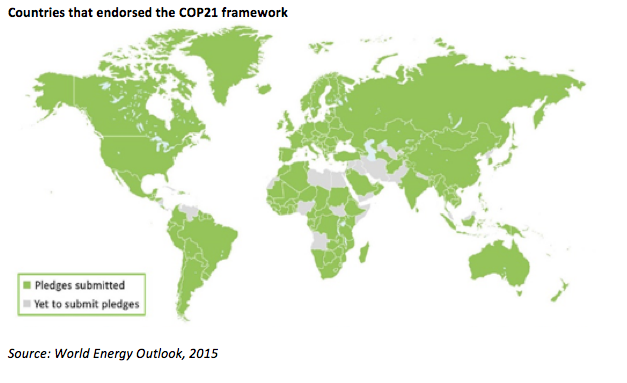 Under their current form, these pledges will not be enough to limit global warming by two degrees but the agreement also provides for extending their reach. Just like any international agreement, its strength lies in the value of the pledge of signatories countries: the major sanction in case of non-compliance will be “naming and shaming” from the authorities in charge of monitoring the implementation of these agreements.

Nevertheless, from the point of view of investors, the main lesson is that the vast majority of world countries have shown their intention to do more against global warming, i.e. to increase the “shadow price” of future greenhouse gas emissions while enhancing the credibility of this increase and its universal character. This visibility is most welcome, especially given the numerous signs of slowdown in terms of innovation against climate change.This slowdown is due to the financial crisis (reducing the ability of companies to invest) ,  the energy crisis in developed countries (limiting investments to “utilities”),the crisis of public finance particularly in Europe (leading governments to reduce their expenditure in R&D on energy ) and instability of policies conducive to green technologies (changes in the structure and level of incentives prompting investors to choose sectors that are more profitable). 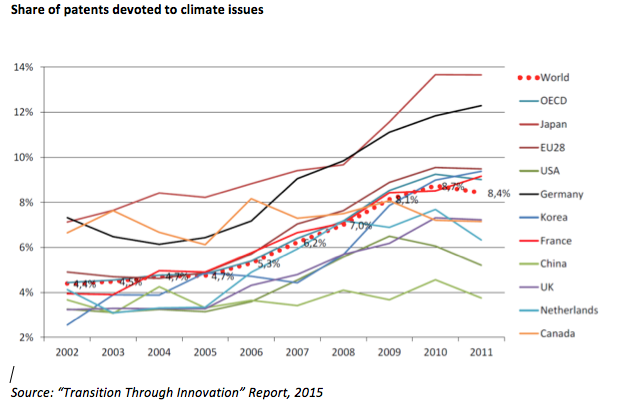 The conclusion of a global agreement also marks a major evolution with respect to current strategies, almost exclusively based on national or regional scales: on this issue, countries can only take steps forward if they feel that others are sustaining part of the global effort. Assets or technologies that emit greenhouse gas will mechanically lose their value (coal mines or extinguishers using high greenhouse gas emitting fluids), whereas those that absorb greenhouse gas (forests or renewable energy projects) will gain value. Investments that sustain the development of this type of technology will increase their profitability.

In such a context, many businesses or business associations welcomed the Paris agreement – among which the USCIB in the US, the MEDEF in France or their equivalents in other countries. In the coming years, an increasing number of economic actors are expected to join the fight on climate issues, in at least two ways. First, by announcing investments in low-carbon technologies or divestments in technology affected by the rise of the carbon “shadow price.” The nature of firms is to react to changes in prices or bet on likely future developments in order to reallocate the resources entrusted to them by shareholders. Second, by initiating a dialogue with governments concerning the practical implementation of their commitments in terms of reducing emissions. The analysis of implemented policies still shows considerable differences in the “shadow pricing” of greenhouse gases. According to an OECD analysis on a sample of provisions implemented among member countries, this price varies from almost zero (for example, hydropower development in Brazil has a similar cost to fossil fuels) to over 1000 $ per ton equivalent (the biofuel program in Denmark). 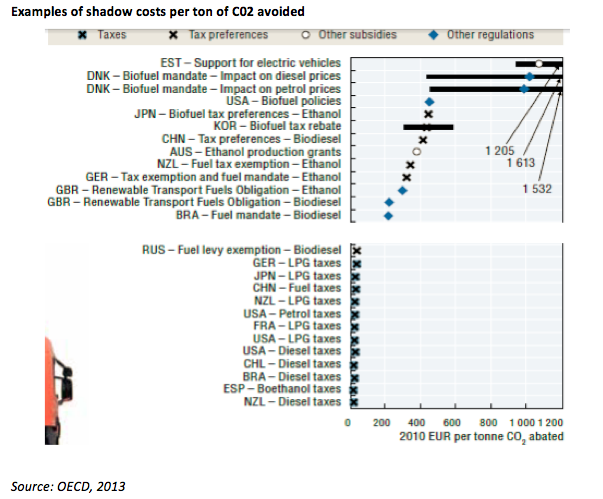 An enhanced dialogue between economic actors and policy makers will be necessary to ensure that the constraints and resources in place to meet the targets in terms of emission reductions are as affordable as possible, that is to say that they focus on options where the cost per ton of CO2 avoided is as low as possible. Citizens all over the world have everything to gain from this strategy: the more the implemented solutions will be affordable, the more companies will invent more affordable solutions, and the cheaper the cost of climate transition. This is a key issue in the coming years, for two reasons. Social reasons, to start with, because households will ultimately bear the cost of this transition: the lower the cost, the lesser the effect on their purchasing power. Secondly, for reasons of sustainability of climate transition: if it is too expensive or if efforts are poorly distributed, some countries could refuse to provide these efforts. In such situations, there is a risk of a vicious circle where some countries refuse to cooperate because others don’t: this kind of cascade effect would end up destroying any project whatsoever.

Following the diplomatic success of the Paris agreement, we will need an economic success in the years to come. After the time of diplomacy, success now depends on firms and researchers. And it will not happen if the economic or legal signals are in conflict with the ambition of the agreement of December 12th.