The electricity transmission network is the backbone of the electrical system, a key asset in the energy transition. It must both adapt to the means of production and meet consumption needs to ensure a sustainable balance between the supply and demand of electricity. The first high voltage lines were developed around centralized means of production with hydraulic and thermal power, and later on, nuclear power. The consumption needs of urban and industrial areas increased quickly after 1945 and determined the layout of the electricity network. Today, renewable electricity and the indispensable solidarity between territories are the main drivers of the evolution of this electricity network.

The development of renewable energy is an important parameter in the evolution of the electricity transmission network. Even though electricity consumption in developed countries stalled for several years, decentralized forms of electricity generation have made the need for network development more pressing.

On the production side, increased flexibility
Indeed, this energy transition leads to changes of location of the sources of production. New sites are more dispersed than “conventional” production means. They most often don’t coincide with the previous cartography of sites. Wind or photovoltaic farms are usually located in areas remote from consumption centers. In Germany, for example, the transport of wind energy from the North Sea to consumption centers in the south raises a major issue and due to the lack of sufficient transmission capacities, renewable generation must sometimes be restrained – both a physical and economic waste. The network must be able to adapt quickly to accommodate new sources of production. 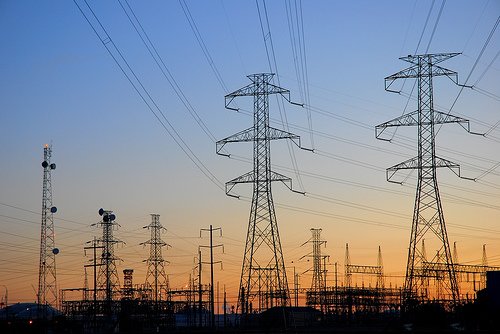 Beyond the issue of interconnection, the massive development of these new sources of variable production (as opposed to controllable means of production that prevailed so far) leads decision-makers to reflect on the management of the electricity system. What means do we have?

The storage of electricity would be a very good response to the intermittent nature of renewable energies and to the variability (daily or seasonal) of consumption. Nevertheless, at this day, technology is limited to pump storage, a proven technique (it has been used for eight decades) but limited by the scarcity of sites and their environmental impact. Furthermore, facilities require the delivery of electricity in both directions: pumping and restitution. Ideally, what we need is diffuse storage. There are many approaches but none will pave the way for large-scale industrial development before one or two decades.

While we lack the capacity for decentralized, sufficient, effective, efficient and green storage, the best solution today for the reception and the development new renewable energies would be to improve flow management. That’s precisely what a large network makes possible.

Pooling production capabilities at different scales, by creating interconnections and linking transmission and distribution networks, allows significant savings while ensuring the supply of electricity of an entire country.

The transition to a continental scale has accentuated this logic. For example, thanks to the network interconnection that extends far beyond the borders of France, the overall power purchased by all French consumers is about four times the actual capability of the country.

Economy of means is not simply about the size of the network. It is also due to a wide variety of differences: cultural, meteorological, production methods. Let’s keep the example of the interconnection of European networks. On the one hand, peak evening consumption never occurs simultaneously due to differences of lifestyles and habits between neighboring countries: for example, people do not have dinner at the same time in France, Belgium and Germany. In addition, the electrical systems of European countries are more or less sensitive to certain hazards. Periods of stress in France depend heavily on low temperatures – typically the peak demand will occur on a cold winter evening – while Germany is very sensitive to wind generation. Pooling of production capacity through interconnection allows each country to share the risk associated with these hazards and thus reduce the need for production capacity.

The electricity transmission network allows to develop sources of renewable energy on a large scale and to improve the stress management induced by their intermittent nature. There will be less need for backup capabilities, often provided by thermal power stations with fossil fuels (coal, gas, oil) that generate greenhouse gas. The network also ensures the timely delivery of local overproduction. An important photovoltaic production during the lunch break in a residential area will be rerouted to the areas of consumption (the network will also cover the needs of this population during the night and with little or no daylight).

The necessary modulation of consumption
A well-managed national and continental network, bolstered by infrastructures adapted to the new geography of production, is the key to the energy transition. But it’s only part of the story.

In industrialized countries, perfectly controllable modes of production, such as hydro and nuclear power, have been implemented until the early 1990s and have led to consider production must adapt to the consumer and not the other way around. The network operator should ensure the adjustment of electricity consumption to fluctuations in consumption in order seek a constant balance between the production and the consumption of electricity.

Today, however, the situation has changed, and should keep on changing. The development of new uses of electricity (air conditioning, proliferation of electronic equipment, mobile phones, etc.) and expected transfers, especially in the transport sector (electric vehicles), require controlling current consumption in order to prevent the overload of power generation facilities and electrical networks.

Peaks of demand, associated with greater climate variability, must also be taken into account. In countries where electricity is used for heating, consumption peaks are increasingly important: in France, for example, 102 GW were reached in February 2012, a 30% increase compared with 10 years earlier. Increasingly frequent heat waves, and the growing number of cooling equipment, have already provoked peaks of consumption. This can raise a problem in terms of production: in Western Europe, for example, peaks of power consumption occur during periods of winter cold and summer heat, that is to say, anticyclonic periods with no wind. This has little consequence as long as wind power represented only a few percent of the total production, but the rise of this energy source changes the game.

To maintain a balance between the supply and demand of electricity, the modulation of consumption is a tool in the same as the development of the network, of the means of production and of storage. Network managers play a decisive role in developing and mobilizing new techniques for interrupting consumption.

Consumption cut-off is a specific form of controlling demand which evens out peak consumption and, more generally, smooths the “load curve.” It consists in reducing the physical consumption of a given site or of a group of players. Interruption will be diffuse in the residential sector and take different forms when applied to industrial sites.

The famous “smart grids” are the most well-known form. These aren’t only technologies, but also market mechanisms, which will gradually transform the consumer in a sustainable consumer. They are currently booming and network managers are the leading players. In France, for example, calls for tender have already led to a sharp increase in volumes of interruptions. Since their introduction in 2010, they increased from 100 MW to 700 MW in late 2013. 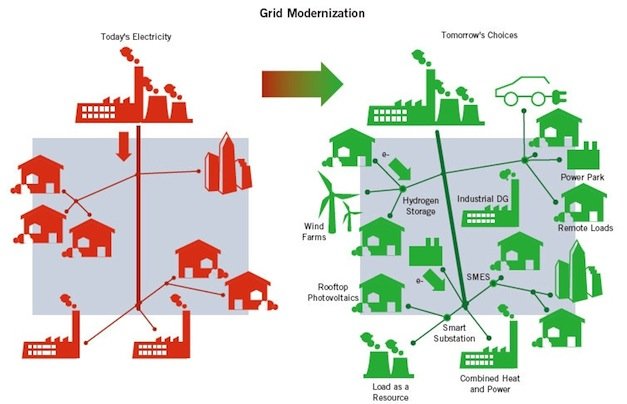 New market mechanisms that will be implemented in the years to come, such as for instance the capacity mechanism (a market on which capabilities of electrical production are exchanged), should support this tendency at medium to long term and contribute to exploit further the flexibility of electrical demand.

Economic optimization, environmental optimization
The pooling and optimization of means of production on the one hand, the dramatic increase and flexibility of consumption on the other hand; all of these aspects relate to a critical mission of the electricity transmission network: territorial solidarity. Indeed, the transport network can equalize heterogeneous regional balances, disparate production potentials and irregular consumption profiles.

In addition to the flexibility that it brings from the production and consumption side, the electricity transmission network is an environmental optimization tool of the electrical system.

Indeed, the management of electricity flows takes into account technical constraints and the ranking of sources of electricity production according to economic criteria. The energies that would be lost if their production weren’t used immediately, such as wind and photovoltaic power, are used first, then run-of-water hydropower and after that, nuclear energy, which has a low marginal cost. Last come the means of production such as coal, gas and oil, which depend on fuel cost.

This operation ensures theoretically an efficient and economic use of sources of production. However, the number of parameters that need to be taken in account put the system under stress, and the rise of renewable energies can further disrupt this balance. Again, Europe is a good case study.

Beyond the technical integration of renewable energies into the power system, their development through support mechanisms raises the question of their relationship with market mechanisms.

This is mostly due to the context. Means of thermal production, especially combined gas cycles, struggle to achieve profitability due to the stagnation of consumption and the decrease in the price of coal and CO2 in Europe. In this context, the input of renewable energy production outside the market can provoke imbalances. Negative prices have repeatedly appeared on the wholesale market, a situation that might occur in some European countries hundreds of hours per year. Without an artificial increase in consumption, a significant increase in electricity production from renewable energies would logically result in the shutdown for very short periods of time of thermal power plants, with all the technical and economic consequences this would imply. Therefore, thermal power plant operators use negative prices to keep their means of production running at the minimum acceptable technical level.

These shortcomings are not only an economic issue because the profitability of power plants raises the question of their maintenance. Which leads to the following paradox: while wind and solar energy, due to their intermittent nature, are likely to enhance the usefulness of conventional means thanks to their scalable output, they could also weaken the sector.

Closing gas-fired power plants across Europe could become problematic. As a consequence, the safety margins we have today and that allowed us to deal with the cold wave which swept across Europe in 2012 will decrease on the 2014-2018 period with an important decrease between 2015-2016. The scenarios discussed in the forward estimate published by RTE in July 2013 show that if an event such as the cold wave of February 2012 were to happen again, under the same climatic conditions (wind, sun, temperature), the power safety standard set by public authorities – i.e. an average three hours of local interruption of electricity supply – could not be met in 2016.

The electricity market is currently struggling to send effective long-term signals, indispensable to meet the European energy and climate ambitions. In Europe, but also in other developed countries, a new model is necessary to avoid jeopardizing the security of electricity supply, a model that could both promote the emergence of new technological and industrial opportunities around smart grids, and allow us to rethink the electrical system’s economy as a whole, to make it consistent with the objectives for 2030. Taking into account the interaction between all of these issues will also impact the quality of electricity supply, including transport networks – one of the main foundations of quality.