In those major industrial countries pursuing their nuclear programmes in a post-Fukushima context, viz., the USA, China, Russia, South Korea and perhaps Japan – Small Modular Reactors (SMRs) are now being considered, alongside the high power stations such as the EPR (European Pressurised Water), as a possible route for a renewed, revised, nuclear power production scenario. The International Atomic Energy Agency deems this approach attractive for newly industrialised countries. Several reasons can be invoked as to their advantage: moderate costs, the capacity to provide power to small markets with electric grids that simply were not designed to handle the power output of today’s classic power stations.

These SMR reactors would have a rated output of less than 300 MW and could be installed in Transportable Nuclear Power Plants (TNPP). Several, quite different, configurations are envisioned, two of which are closely associated with naval architecture and ship-building construction. The first is the floating barge design such as the Russian Akademik Lomonossov, with its two SMRs: this barge was launched in 2010 and will be anchored off the Kamchatka Peninsula (Far Eastern Russia); several other barges will be launched by 2015. The second design is that of subsea (or floating) plants, the main interest being that they could supply isolated regions with an access to the sea. 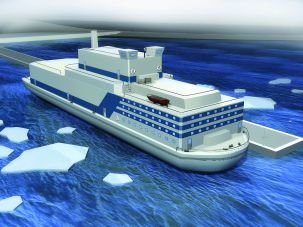 Nuclear power industries and ship-building sectors
The marine environment has specific constraints and therefore it is not surprising that many advocates of SMR stations call for collaboration between the nuclear power production industries and the ship-building sectors. Working in marine engineering requires special know-how, of course and it is this know-how that had encouraged certain ship-builders to diversify their activities into the fields of renewable marine energies (offshore wind turbines, immersed turbines).

Collaboration here also implies a question of scale. The industrial capacity of major ship-builders are better adapted than those of the classic nuclear power station constructors and they are familiar with working on large scales. The possible SMR market is different, say, from the EPR market. Competitiveness here depends on various criteria, including the price tag. If there is a capacity to build plant in a mass-production mode, assembling standard parts, this constitutes an intrinsic advantage. Under these conditions, the modular construction mode makes the SMRs competitive. This mode (building a range of modular parts, or “technological bricks”) is highly suitable for all sorts of land or marine configurations.

Our naval defence sector is to the forefront in this area of skills and, for the past few decades, have led to nuclear speciality, in particular submarines and nuclear propulsion aircraft carriers. We have entered into several strategic partnerships. The DCNS Group, for example, is one of the world leaders in naval defence and works in close collaboration with Areva-TA. Over and above this familiarity with the nuclear energy sector, naval defence industrialists share an industrial culture with specialities o the nuclear power generation sectors: control of complex systems, exceptional industrial facilities and a track-record in large scale programmes.

With these advantages, certain actors have started moving into the civilian nuclear power sector. First and foremost with the concept of transportable coastal SMRs: the idea is to push the logic underpinning power station prefabrication in a ship-yard environment as far as possible, and then transport the components to a coastal final assembly point. Fukushima has taught us about the risks of this model and indeed it was with this context in mind that the DCNS Group adopted another strategy, aiming now at subsea SMRs.

The concept is embodied in the Flexblue project, a novel category, viz., a small-scale subsea civilian nuclear power station, that had been designed and developed to comply with the dual corporate concern of simultaneously attaining high competitiveness and a high safety factor.

The Flexblue Project
Flexblue is a steel cylindrical hull, approximately 15m in diameter, 150m long and weighing 20 000 tonnes in its operational configuration. Each hull houses a pressure water reactor (PWR) with a rated output of approximately 160 MW – this corresponding to the demand of a city of 150 000 inhabitants in a developed country such as France. In a developing country, this equipment could supply the needs of a population three times larger.

The innovative feature of Flexblue lies in the fact that this SMR model, built in a shipyard, can be carried to the operations site and immersed and anchored at a depth between 50 and 100m. It will be remotely controlled from a land-based centre and can accommodate a continuous reduced local supervisory team.
The SMR units will possess a safety level in compliance with the most demanding international standards, at least as stringent as those that apply to land-based Generation III reactors. In particular, the core of the Flexblue reactor will be totally confined, making it impossible for any contact between the nuclear (radiating) elements and the marine environment.

As is the case for land-based reactors, there will be 3 protection barriers: the fuel cell case and spent fuel shrouding, the primary coolant circuit and the hull itself.
The design of Flexblue modules and the procedures for immersion allow the operators to use natural cooling of the reactor core, using the surrounding sea-water. Excess heat will be evacuated through the steel hull and will not require any energy input – the process will simply rely on natural forces such as gravity, pressure differential and convection currents.

The originality of the concept is to be able to reach and maintain a stable state reaction without any external energy input and this offers a hitherto unrivalled level of safety. When moored in position and ready for operation, the system will be able to resist catastrophic events such as occurred at Fukushima: earthquakes, tsunamis will have no effect on a Flexblue reactor. Immersion protects it from seismic damage, Archimedean thrust balances the weight of the module and indeed the latter can easily be uncoupled mechanically from the sea floor via the anchor system. The module likewise offers unequalled protection in the case of a tsunami wave, inasmuch as the effects of a tsunami decrease to a very large extent as a function of the depth. Moreover, using passive safety systems coupled to the immersion location allows the operator to guarantee cooling of the reactors and the confinement shells

Operating a subsea power station also leads a very low impact on the environment. Questions related to the temperature of the water round the hull become marginal at a depth of between 50-100m compared with standard land-based stations located in estuaries, or on rivers. Very little civil engineering work is needed; the installation has no effect on the coastline and is reversible for the system’s life expectancy: subsea reactors (and the same applies to barge-mounted stations) can be moved to new locations. When the end of operations comes, the site returns to its ex ante state: the modules are moved back to the shipyards and can be dismantled using ship-breaker methods derived from those applied to civilian or military vessels.

Market opportunities
Subsea power stations – which are not on a par with large-scale land-based stations – could primarily be attractive for islands, for isolated regions, for industrial zones and, in general, to countries with coastal areas and an average sized electric grid (from 1 to 10 GWe) or with a low level of interconnections. For this sort of network, the reference price to produce electricity is set by coal, gas or oil-burning technologies where prices are highly variable and often much higher than the prices we have in Europe, given the high local transmission costs.

In the nuclear energy sector, scale of size is important: an SMR will be more expensive, proportionately, than a land-based large-scale power station. Indeed, it is in this area as we draw up the economics of SMRs, that the industrial solutions already developed for military vessels prove most attractive. A model such as the Flexblue reactor has real advantages compared with other more traditional SMR design solutions, viz., standardised design largely independent of the final location chosen for operation: factory fabrication of parts, assembly in a shipyard leading to total transportability to the operations site; negligible needs in terms of civil engineering and reduced on site work. The modularity factor in design construction is also financially interesting: the investments needed to build several Flexblue units could be procured gradually, evolving as the power needs progress and this avoids having developing counties looking for inaccessible investments.

As is the case for land-based power stations, the design and choice of subsea reactors must include a degree of redundancy of electricity production plants and to embody a logic inspired from that in the Internet. System redundancy is ensured by an interconnected grid (this also being the principle that underpins so-called smart grids, i.e., an intelligent electric distribution network that depends closely on the multiplicity of the production sites and the various interconnection nodes).

A power generation station is never really stand-alone: electric distribution networks rely on a basic rule that a given electric installation plant will not represent more than 5 to 10% of total production. Given its small rated size, an SMR can be connected to a grid that cannot in fact accommodate a high power station (i.e., power output from an EPR is equivalent to that of 10 Flexblue units). The modular design allows the local authorities to follow the growth of local electric need: SMRs can be installed in series and gradually build up a unit production “farm”.

Last point: the architecture of electric distribution networks must take into account the physical, financial and environmental constraints for electricity transport. For example, the environmental impact of high voltage line is often a serious drawback to siting and to reasoned grid interconnections. The geography and distribution of the consumer outlets are the prime criteria for the choice of siting of production stations and the organisation of the distribution.

The SMR market will open up considerably if a competitive product – counterbalancing the effects that are in favour of large-scale reactors – is proposed. This is the topic on which most actors are concentrating today in this emergent sector. A product such as Flexblue will have the capacity to produce electricity at a stable and competitive price (approx. 100 €/MWh) from the first kW produced and first unit connected (we are referring to total cost integrating the system’s amortisement; by way of a comparison, the figures for an EPR model are close to 90 €/MWh). The potential market for this model of reactor is estimated at several hundred units over the coming 30 years, notably in South East Asia, but also elsewhere in the world. The competition is now under way and the first SMRs will be in the market-place before 2020.

A shorter version of this article (in French) was published in La Jaune et la rouge, Ecole Polytechnique alumni’s magazine.