Tech gadgets undergo a rapidly accelerating product cycle. Devices hit the market, wow the crowd, mature and sunset at an ever increasing rate. For instance, the netbook, a light, stripped-down laptop, was created in 2007, shortly peaked and then plummeted as consumers bought tablets. Research firm IHS iSuppli predicts that by 2015, netbooks will be extinct after hitting a peak of 32.14 million units in 2010. Experts at Wharton say that smartphones and tablets are here to stay, but slower growth as markets mature isn’t too far behind.

“Smartphones and tablets have grown more quickly than any consumer electronics device we’ve ever seen,” notes Kevin Werbach, legal studies and business ethics professor at Wharton. “The torrid rate of growth means those devices are reaching the maturation stage more quickly than personal computers or other prior devices did. It has been only a handful of years since the introduction of the iPad in 2010, but already much of the core market in the U.S. and other developed countries has a tablet.”

IDC said that worldwide tablet shipments were 45.1 million units, down 9.7% in the second quarter relative to the first quarter. Second quarter shipments were up 59.6% from a year ago, but the research firm noted in a press release that the lack of a new iPad from Apple hurt the market. “With no new iPads, the market slowed for many vendors, and that’s likely to continue into the third quarter,” said IDC analyst Tom Mainelli. “However, by the fourth quarter we expect new products from Apple, Amazon and others to drive impressive growth in the market.” On August 29, IDC cut its 2013 forecast slightly from 229.3 million to 227.4 million tablet shipments.

In other words, the tablet market now is experiencing similar dynamics to the PC industry, where much of the growth falls in the second half of the year. Barclays analyst Ben Reitzes wrote in a research note that sales of the iPad “clearly have the flu.” Apple shipped 14.6 million iPads in the fiscal third quarter, well below the 18 million he expected. “The market has really suffered from a lack of new and compelling devices.”

Nevertheless, analysts covering Samsung and Apple question whether the two mobile market leaders can maintain profit margins and have expressed doubt that they will be able to launch new devices that are enticing enough to offset buyer fatigue. Sales of Samsung’s Galaxy S4 phone didn’t live up to initial expectations. Meanwhile, Apple on Tuesday introduced the latest upgrade to the iPhone, the 5S, along with a new lower-cost model, the 5C.

With its $99 price tag for a 16GB model, Apple is hoping the 5C — which is made of plastic and comes in five colors– will put the phone within reach of consumers in fast-growing emerging markets. The 5S, meanwhile, includes an upgrade to an A7 chip and is the first smartphone based on a high-performance 64-bit architecture. It also comes in three colors — silver, gold and “space gray.”

Played Out
According to Wharton legal studies and business ethics professor Andrea Matwyshyn, rapid product cycles mean that consumers, who have grown dependent on electronics, are becoming more demanding. “Consumers are increasingly comfortable when it comes to appreciating novel designs, but if the bells and whistles don’t add new functionality, they won’t buy” a device, she says.

Wharton management professor David Hsu agrees. “The underlying question is: What functionality is unique and can push consumers to upgrade? Upgrading just for incremental improvement isn’t as compelling.”

Werbach points out that although smartphones and tablets have been refined in recent years, they have fallen short of any breakthrough uses. “The first few years of smartphones and tablets were about software innovation, and then the development of cloud-based systems tied to the devices,” he notes. “There has been significant refinement since then, but today’s devices basically have the same functionality that Apple first delivered when it added the App Store to the second-generation iPhone.”

According to [email protected] technology and media editor Kendall Whitehouse, screen size might be the most critical differentiator for consumers. “The middle ground in screen sizes is where the market challenges will be.” The smartphone is highly portable and will continue to do well, Whitehouse predicts. Tablets will increase in functionality to become lightweight PCs. Standalone, limited function tablets are the most vulnerable. “The extremes at either end have a niche. At home I want the biggest screen I can get. When I’m on the go, I want something portable. It will be a market made up of large screens and things I can carry in my pocket.”

Today’s Winners, Tomorrow’s Losers?
The angst over whether consumers will continue to buy the latest, greatest device has Apple’s board of directors pushing for a faster innovation cycle, according to Fox Business News, which reported that there is pressure on CEO Tim Cook to bring new products to market faster. Apple’s iPhone 5C will be on sale starting Friday, and the 5S model is available for pre-order starting September 20. An Apple television set also has been long rumored.

“Apple has created so many product waves, one has to wonder whether it can continue to do so,” says Whitehouse. Barclays’ Reitzes argued in a research note that Apple should concentrate its iPad sales efforts on corporations to hold market share against Samsung and a bevy of inexpensive Android tablets. According to Reitzes, Apple’s tablet already has traction in corporations, and if it could develop more business use, the company would have a more stable base for its device.

Meanwhile, Apple’s rival, Samsung, has its own concerns. Competition from Chinese smartphone makers ZTE, Huawei and Lenovo are cutting into the firm’s profits. “Samsung and Apple both have to worry about the ‘Dell problem,’” says Hsu. Dell pioneered an efficient PC supply chain and the ability to quickly customize computers, but it missed the mobile trend and hasn’t been a player in smartphones or tablets. “Both [Apple and Samsung] have been doing great many quarters in a row, [but they are] focusing on giving people what they want now, not what they want in the future.”

Neither Samsung nor Apple can look to recent history from PC companies for much insight on how to navigate faster product cycles. Few traditional PC players have been able to handle the rapid pace of the mobile product cycle. Microsoft is currently looking for a new CEO, as Steve Ballmer plans to retire within the next year after a not-always-successful attempt to focus the company on cloud services and devices like the Surface tablet. Microsoft’s mobile platforms are a distant third to Android and Apple’s iOS. PC vendors in general have struggled in the so-called “post-PC era” — Hewlett-Packard, Dell, Acer and Asus have all failed to hit home runs with mobile devices.

Analysts covering Samsung and Apple have expressed doubt that the two mobile industry leaders will be able to launch new devices that are enticing enough to offset buyer fatigue. 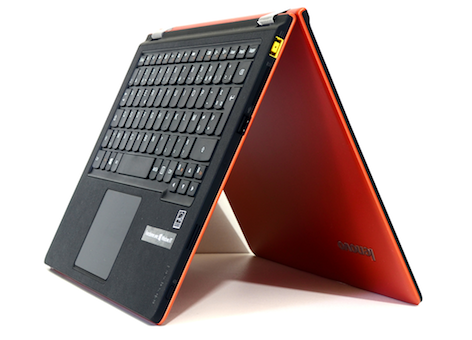 Of the PC makers, only Lenovo, which recently became the number-one PC vendor globally, has managed the transition to mobile relatively well. In China, Lenovo is the second-largest smartphone maker and has plans to take a smartphone called the Vibe X global. Lenovo has also created laptops, called “convertibles,” that can double as a tablet. In addition, the firm has an all-in-one PC that can act as a table-top tablet. Lenovo executives say the company is the largest player in the Windows 8 convertible market and that its Yoga convertible PC will inspire new functions throughout its products.

The Next Big Thing
For smartphone and tablet makers, the pressure to innovate will remain high. The question is: How? “The next stage of innovation is going to be about hardware and data analytics,” says Werbach. “We’re going to see new form factors like smart watches and smart glasses [such as] Google Glass, as well as a proliferation of sensors. And as more people have multiple connected mobile devices at the same time, services that tie them together will become increasingly prominent.”

According to Werbach, the connections and services will matter more to consumers than the actual hardware. Google has multiple cloud services focused on documents, sharing and apps, and Apple has its App Store and iTunes juggernaut. Ultimately, these services will be tailored to individuals. More business models similar to Amazon’s are likely to take root: Amazon breaks even on its hardware sales, but profits from usage and follow-up sales of content.

Hsu, however, adds that there’s still plenty of potential for hardware innovation. “It’s hard to disrupt the dominant design for computing. The form factor for what we do is usually a rectangular screen. That’s why there’s excitement for Google Glass and wrist watches. There’s going to be some interesting experimentation.”

Recently, Samsung has been highlighting the potential of flexible displays — which can bend and wrap around a person’s wrist, for example — and is holding a business model contest to find creative uses for the technology. Matwyshyn says that she has hope for this particular innovation because it would give consumers the ability to tailor hardware to their personal needs.

According to Whitehouse, new designs or product categories will need to combine existing devices in order to gain considerable traction. The market won’t support distinct categories of devices that perform tasks being subsumed by smartphones and tablets. “Consumers will gravitate to a future enhanced tablet or a souped-up smartphone,” he says. “There are signs of convergence. It’s not like people are buying separate GPS devices or point-and-shoot cameras anymore.”

—
This article was published in Sept. 2013 by [email protected], under the title “Still hot – or not? Technology Firms Face Faster Product Cycles”. Copyright [email protected] All rights reserved. Translated and reprinted by permission.