“Technology will disrupt every facet of every job,” says Chamath Palihapitiya, the former Facebook executive turned venture investor. For executives, he argues, it isn’t enough just to understand the technologies, such as sensors and autonomous vehicles, that will have an outsized impact on improving the quality of life and economic output. New waves of technological disruption will probably blindside executives who don’t build technical proficiency into the way they manage their organizations. This interview was conducted by James Manyika, a director in McKinsey’s San Francisco office. What follows is an edited transcript of Palihapitiya’s remarks.

Three technologies to watch
I’ll tell you the three things that I’m most excited by. The first is sensor networks. I’m extremely excited about that. The second is actually this push towards automated transportation. And the third is around a very specific application of big data.

So for the first example, what we’re seeing now is sensors everywhere. And before, sensors were when people thought, “Oh, is that an RFID1 chip?” No. It’s your phone, which has like 19 different things that it could be measuring at any given time. It’s clothing that you’re wearing, it’s a Nike FuelBand, a Fitbit, whatever. But the point is, the number of physical sensors are just exploding in scale. They’re in the roads, they’re in the air, they’re on your body, they’re in the phone, what have you. 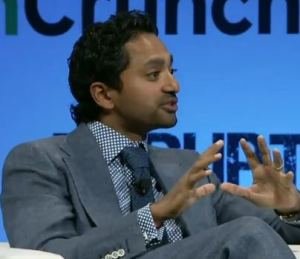 And as that happens, what we’re going to see are extremely explicit ways of improving one’s quality of life, one’s economic output, in really tangible and simple ways. So I’ll give you a very simple example. There’s a great little company that’s built a sensor that sits on top of an asthma inhaler. So why is that important? Well, there’s like 30 or 40 million people that unfortunately have to deal with asthma. And when you think about the cost of asthma as a health-care problem within the United States alone, it’s $40 to $50 billion when you measure all the emergency-room visits, et cetera.

And why are people going to the emergency room? Well, it’s because they don’t have a fundamental understanding of when they should be using their inhaler proactively. So what does this sensor do? This sensor measures the time and the date of when you last used your inhaler, and then it measures all this environmental data. “Where are you? What’s the pollen count? Tell me what the weather looks like.”

And then it starts to build this heuristic model. And then it starts to paint it forward and say, “Oh my gosh, tomorrow is a bad day. Take a preventative dose. Do this more often; don’t do that.” What happens? You don’t have these massive attacks. The point is, these sensor networks will drive tremendous value and efficiency for people. And I think we’re not yet ready to really understand the totality of that impact, but it’s going to touch every facet of our lives. So that’s one area that I’m extremely excited by.

The second is really what Google is pioneering in the autonomous-vehicle space. It is probably the one thing that I’ve seen that could fundamentally have the high-order-bit2 effect on GDP. You can completely reenvision cities, transportation models, and commerce with all these autonomous vehicles, with the ability to ship goods.

So you can imagine a fleet of small electric cars that deliver all mail. A fleet of drones that drops off parcels from Amazon, Walmart, and Target, right to your doorstep. A fleet of trucks that doesn’t cause traffic and congestion. An entire fleet of city vehicles paid for and bought by a state or by a city that provides public transportation in a predictable way. All these things have massive impacts to commerce and the mobility of individuals. And I think it’s not well understood.

And then the last idea is that big data is kind of like this stupid buzz word—like “growth hacking,” frankly—where you’re really talking about just creating more noise and not enough signals. But in the specific case of genetics, I think we’re making an extremely important shift, which is shifting the burden away from biologists to computer scientists.
Because when you sequence an entire genome, what you’re really doing is spitting out a 4 GB to 5 GB flat file of codes, which can be interpreted, where you can build machine learning—supervised or not—to intuit things, to make connections, to find correlations, to hopefully find causality. And across a broad population of people, you have the ability to use computer science to solve some of the most intricate problems of biology and life.

And so I suspect in the next 10 to 15 years, you’re going to see these massive advances there, where it will literally be a group of computer scientists who basically say, “If you express the BRCA1 breast cancer gene, here’s the protocol that we’ve seen across a wide population of women that actually prevents the onset of breast cancer.” Amazing.

Managing disruption
The single most important thing, in my opinion, is the management, the rewards, and the development of human capital. Now, people say that all the time, though: “Oh, of course, it’s all about people.” But I think now the framework for what that means can be better understood.
If we think about all these things that we’ve talked about, there’s an arc of quantitative understanding that is lacking in a lot of companies. There’s an arc of technical proficiency that’s lacking in most companies. There’s an arc of rewards and recognition that tends to lag and tends to not feed the top 1 percent or 5 percent but tends to manage to the middle. Those are extremely inherent biases that have existed in companies for decades.

But when you see the few companies that get it right, what they’ve done is they’ve disrupted those three specific things. They’ll say, “OK, you know what? It’s all about the top 1 percent. Everyone else, tough luck. We celebrate the best, and everybody else can tag along. We cull the bottom, and we’re super aggressive. We have an extremely deep quantitative understanding of our business. We know how to optimize it, we know how to think long term about it, and we make long-term tradeoffs every day for the future long-term defensibility and success.

And everyone is rooted with a technical understanding, because technology will disrupt every facet of every job as expressed by all these people in my company. So unless they’re adept at seeing it before I am, by the time they filter it up to me as a CEO or president, it’s too late. Because what am I doing? I’m glad-handing with people, I’m having random meetings. Everyone’s telling me everything is great, until it’s not.”

Speaking JavaScript
I believe very strongly in the value of technology, its ability to sort of improve productivity. The problem with many of the productivity gains that we see in the economy today is they actually leave more people behind, in many ways, than they pull forward. So one way to think about that is that as more and more things become technological by definition—less mechanical and more technological—you actually need more technical people. And so the way to think about that is, for example, when you think about education. Education today teaches you social science, it teaches you philosophy, it teaches you English, it teaches you math. But we don’t view technological understanding, or the knowledge of a framework, as the equivalent of understanding any other language.

So if we thought it was really important for everyone in the United States to speak English, and hopefully for a large majority maybe to speak Spanish, why shouldn’t people understand how to “speak” JavaScript? I don’t know. And how do you think about now graduating or matriculating millions and millions of kids who “speak” technology as proficiently as they speak a verbal language?

And probably what you find is, if you actually had knowledge of a technical language, you would probably “speak” that language more in your daily life than the actual verbal language. I think coding is the blue-collar job of the 21st century. There’s nothing wrong with that. We are in a world right now where these abstractions are getting so good. What it meant to code 10 or 15 years ago when I was learning was actually a very difficult premise, in my opinion.

These are extremely low-level languages. You’re dealing with hardware in a way that you don’t have to, today. We’re so well abstracted that, in four or five years, my children will code by drawing things on a page and it will translate it into code. So what it means “to code” is becoming a simpler definition, which means by extension that more people should be able to do it.

So it is the type of thing that I think is universally translatable. Learn to code; everything else is secondary. College doesn’t matter that much. It is the most important job of the next hundred years.

Chamath Palihapitiya is founder and managing partner of The Social+Capital Partnership. This interview was conducted by James Manyika, a director in McKinsey’s San Francisco office. It was originally published in McKinsey Quarterly, www.mckinseyquarterly.com. Copyright (c) 2013 McKinsey & Company. All rights reserved. Reprinted by permission.