Larry Page recently acknowledged that Google doesn’t have any idea what the best use is for Glass or how the project will ultimately turn out. The success of such a disruptive device doesn't depend only on its capacity to drive a fashion, but also on social acceptance. Will it remain a geeks' toy? Or is it the beginning of a new wave of intelligent objects? Privacy issues will be crucial, as well as the set of services available. More than marketing penetration strategies, the key asset for Google could be its large ecosystem of programers and their ability to create innovating services and uses.

“Google Glass could be big, or it could be the next Edsel or Segway,” says Wharton marketing professor Peter Fader. “It’s hard to think of a technology that’s more potentially disruptive or laughable. There’s no way to tell. This thing is so wildly different that there’s no analogy for it and no way to fully conceptualize its uses.”

Google Glass is eyewear that incorporates a miniature computer with a display attached to its frame; it can shoot pictures, take video, run apps and deliver information such as travel directions. The interface is controlled by voice recognition – a user can say “take a picture” to snap a photo – as well as head nods and swipes of a control bar on the side of the glasses. Google began shipping its “Explorer Edition” of Google Glass in April for $1,500 – a version that isn’t meant for mass consumption, but rather for software developers looking to explore uses for the eyewear.

In many respects, Google Glass is a grand experiment, and the search giant has enlisted the large ecosystem of programmers for the company’s Android operating system to refine the eyewear before it is released to the public. Speaking at the Google I/O developer conference in San Francisco on May 16, Timothy Jordan, senior developer advocate at Google for Project Glass, said to software developers that the company wanted them to “tell us what your dreams are for Glass.” Jordan also noted that Google was creating more tools they can use to introduce services for the device.

On May 15, Google CEO Larry Page hit on a similar theme during his Google I/O keynote. “Our goal is to get happy users using Glass,” said Page. “Ultimately, a lot of your experiences can move to Glass. We’re relying on software developers to figure that out.”

Page also acknowledged that Google doesn’t have any idea what the best use is for Glass or how the project will ultimately turn out. “I think part of the answer is that we don’t know… I love taking pictures of my kids with Glass. For me, that’s enough,” said Page, who described Glass as an “adventure that may take years.” 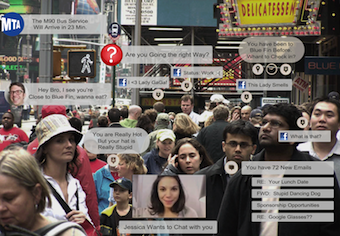 What could the world look like through Google Glass? – source : Ajit Balkawade, Wisestep.com

Fashion for the Socially Inept?
According to experts at Wharton, Google is taking a reasonably slow approach to Google Glass by keeping the audience limited, building buzz and developing its eyewear ecosystem. On May 16, the company announced that a series of popular applications such as Facebook, Twitter and Evernote would be available on the device.

“Google Glass – or something like it – is the future. However, it’s not clear how far off that future is,” notes Kevin Werbach, professor of legal studies and business ethics at Wharton. “It may be quite a few years before Google Glass reaches the price point and convenience level for widespread adoption. And it may take longer for social mores to adapt to the point where wearing something like Google Glass is considered normal.”

Indeed, social acceptance of such a device will be critical for adoption – and so far, the jury is out. A recent “Saturday Night Live” skit mocked the Google Glass voice and gesture commands and questioned whether consumers could really carry on a conversation well – or at all – while wearing the device. Essentially, the comedy sketch portrayed a Google Glass wearer as socially inept.

Given the uncertainty, Fader argues that Google needs to follow a “skim” marketing strategy. A skim strategy focuses on putting a product in the hands of lead users or “influencers” – in the case of Google Glass, that would be tech bloggers and software developers. From there, the product can spread organically. Cell phones in the 1980s illustrate a skim strategy, says Fader. Initially, mobile phones were marketed to physicians and real estate professionals who needed a way to remain in contact with others, but the devices eventually went mainstream.

An alternate “penetration” marketing strategy would revolve around a big-splash approach. A classic example is the 2001 launch of the Segway transportation device on “Good Morning America.” The Segway was never adopted widely, however, and Fader notes that it may have been more successfully marketed to niche segments such as airport workers or security guards. There is some element of a penetration strategy for Google Glass, he adds, given that the Google’s device has received fairly widespread attention – or at least enough to warrant the “Saturday Night Live” parody. “Google Glass is interesting because it has aspects of both penetration and skim approaches. Google has to think that [marketing] decision through, because Google Glass’s early PR may be creating more buzz and frenzy than Google wants to create. Google may want to restrict distribution or raise prices to slow things down so Glass can trickle into society,” Fader says.

[email protected] technology and media editor Kendall Whitehouse agrees that a slower pace would be beneficial for Google in this case. “It makes sense that Glass ramp up slowly over time. There is a lot of tweaking that needs to be done on a product this complex and this different. It’s to Google’s advantage to fine tune the user experience as well as get developers to deliver a rich set of applications before going after mass adoption.”

Werbach adds that it’s almost impossible for Glass to go mass market from the outset. “Google Glass today is not a mass-market product. The price is too high and it’s marketed as a premium product for bleeding-edge technology geeks, he notes. There’s every reason to think Google Glass will become cheaper and smaller and better over time. It will also take time to address the legal, ethical and cultural issues that Google Glass raises. There’s simply no way this is a product that would take off as fast as, say, the iPhone, regardless of the price.”

A 1984 Feeling
According to Wharton legal studies and business ethics professor Andrea Matwyshyn, consumers will need time to learn how to incorporate Google Glass into daily life. “Google has to be careful not to overwhelm people with novelty,” she says.

Bite Interactive, a mobile application company, conducted a survey in which only one in 10 U.S. smartphone owners said they would wear Google Glass regularly. The survey, which polled 1,000 adults, also found that 38% of respondents wouldn’t wear Google Glass even if it were priced within their budget. Another 45% indicated concern that Google Glass would be too socially awkward or irritating to wear.

Joseph Farrell, executive vice president of operations at Bite Interactive, wrote in a blog post that “the average American perceives Google Glass as a toy made solely for the tech-savvy elites.”

Social awkwardness may be one worry, but the largest cultural issue Google Glass may face is concern about privacy. “As technology becomes more and more capable, people are getting a 1984 feeling,” says Wharton marketing professor Pinar Yildirim, referring to the George Orwell novel. “I believe the fear comes from the unknown: We do not know what trails we are leaving knowingly or unknowingly, who has access to these trails and what they can do with them. In technology, we are reaching a stage in which the levels of advancement are beginning to exceed the limits of human capacity.”

“There are privacy implications, and interactions will change because of the way these digital-physical hybrid devices change human relations, adds Matwyshyn. We’re entering a wearable cyborg model. It sounds sci-fi, but it’s becoming reality. Glass will force us to start thinking about new approaches to policy and law.” Recently, eight members of the Congressional Bi-Partisan Privacy Caucus sent a letter to Google CEO Page asking about the privacy issues raised by Google Glass and the company’s policies and expectations regarding those issues.

Werbach predicts that Glass will speed up existing conversations surrounding privacy. “For privacy scholars, Google Glass is like a final exam question transported into reality, he says. With the rise of camera-enabled mobile phones, we’ve been moving into a world where everyone is potentially watching and recording everyone else. Google Glass is in some ways the endpoint of that trend. If every person you encounter might be video recording everything they see, our expectations about privacy shift dramatically.”

The Fourth Amendment to the U.S. Constitution protects against warrantless government searches whenever there’s a “reasonable expectation of privacy,” notes Werbach. Google Glass, he adds, could create a world where it’s not reasonable to assume that an interaction with another person will be private.

According to Fader, the privacy concerns are somewhat overblown: Google Glass merely does what your smartphone would, he says. “I have no concerns about the privacy issue. Google Glass is more about social weirdness than a legal issue.”

Seeing Potential
Speaking at Google I/O, Page said the technology industry needs to focus on “building great things that don’t exist.” Page also added that computers need to “get out of the way” and enhance lives while remaining in the background.

Whitehouse notes that Google Glass is “another step toward interacting with technology in a way that’s transparent and so automatic you don’t have to think about it.” If Google leads that charge, the search giant will be able to manage the information generated by devices and customers and use it to create revenue and improve products, he adds.

In addition, if Google Glass succeeds, it could help Google become a hardware player with cutting-edge designs. “Glass is a harbinger of the type of mainstream products we’ll see in five to seven years, predicts Matwyshyn. The rewards to Google could be tremendous. It could be the market leader in wearable technologies.”

Google’s primary role could be to offer services to these new computing devices – whether glasses, watches or other future devices, says Werbach, who notes that many technology giants such as Microsoft, Apple and Amazon also offer hardware, services and software.

Google executives haven’t talked about how Glass will make money. Under Google Glass’s terms of service, developers are not allowed to take payments or monetize their apps through ads. Experts at Wharton predict that Google will ultimately monetize Google Glass somehow, most likely through targeted advertising.

Before profits, however, Google will have to scale Google Glass and garner mainstream adoption. Matwyshyn points out that it’s not clear whether Google Glass is fashionable beyond the technology set. “What’s cool in technology circles doesn’t map to mainstream social circles, she says. These two realities are converging, but it’s necessary for Glass to reach for the middle ground.”

According to Yildirim, technology is becoming increasingly mainstream, so Google Glass could become fashionable yet. As a result, Google Glass may become more than a techie accessory worn at developer conferences such as Google I/O. “The gap between market cool and tech cool is not large; tech cool [could become] market cool in no time,” she says.